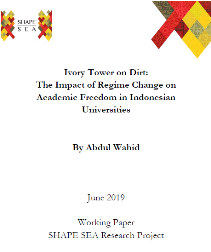 Regime changes in Indonesia from early independence in 1950 to the New Order period of 1980 have had significant impact on the practice of academic freedom in Indonesian universities. Under both the Sukarno and Suharto regimes, universities were used as sites for carrying out the leaders’ political objectives, resulting in great costs to the rights of members of the academic community and ideological traditions. The 1965 issue in particular illustrates the lasting impact of regime change on academic practices among Indonesian universities, as the anti-communist military campaign suppressed the universities’ nascent tradition of academic freedom, while today, many of the documents and archives on the 1965 events remain inaccessible to the public.