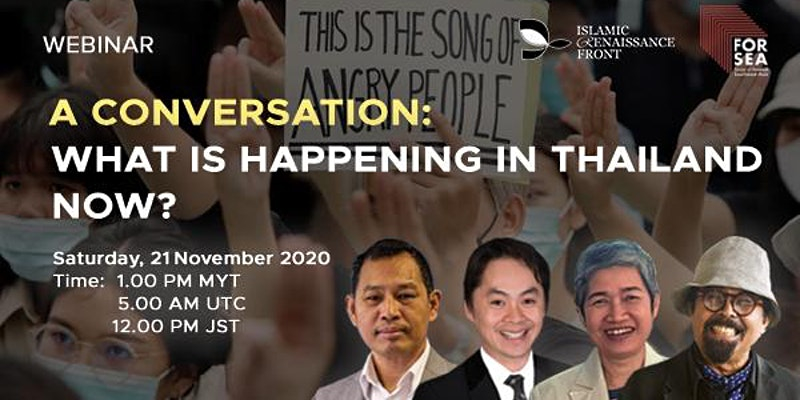 Dr. Sriprapha Petcharamesree, Programme Chair of Shape-Sea, will join an esteemed group of human rights defenders at this timely webinar on the current situation of democracy and human rights in Thailand.

The Thai people expressed their discontent with the government through massive demonstrations on the main streets around Bangkok from October 17-21, 2020. The protesters demanded that Prayut Chan-o-cha, the Thai Prime Minister who came to power through a coup d’état in 2014, steps down. His victory was disputed, with the demonstrators adamantly against the idea of Thailand being led by a former military general. However, Thai King Maha Vajiralongkorn inaugurated Prayut as Prime Minister for a second term on June 9, 2019. This seemingly undemocratic move has provoked various protests that are still ongoing and show no signs of abatement.

The origin of the protests dates back to February 21, 2020 when the Thai Federal Court ruled in favour of dissolving Thailand’s pro-democracy party, the Future Forward Party (Phak Anakhot Mai). This led to hundreds of people rallying in protest on the streets. Pro-democracy students from the Faculty of Political Science Thammasat University in Bangkok under the Free Youth group (Yaowashon Plod Ak), who staged this protest, further demanded that the power of the rulers be curtailed by reviewing the 2017 constitution. Pro-democracy protesters also planted a plaque on the ground next to the Thai Grand Palace on Sunday, September 20th, as a harsh statement to the government to be more democratic. The plaque reads: “This country belongs to the people — not to the monarch.” The Free Youth Group voiced out three demands during their huge demonstrations: first, the dissolution of parliament; second, ending intimidation of the people who criticize the government and the royal family; and third, the amendment of the constitution.

To the outside world, the demonstrations seem to be an obvious if not natural conclusion of the political struggle of the last two decades in Thailand, with the Thai monarchy always siding with the military in the struggle between democratic and authoritarian forces. Yet, in the Thai context, this is an epochal change, a sudden and profound transformation that many people are still finding it hard to grasp. After a week of daily protests springing up across Bangkok and the rest of the country, what happens next is uncertain. Regardless of what the short-term consequences of these mobilisations will be, the verbal attacks against the monarchy, which have become the new normal, is unprecedented in the country’s history. It points to the unexpected and sudden disintegration of monarchic hegemony, a political ideology that has dominated Thailand since the Cold War.

In this webinar, we shall discuss the Thai students’ movement history and involvement in the protests, and the merits and demerits of their three main demands. We shall also reflect on whether this phenomenon could spread to other monarchical countries around the region.