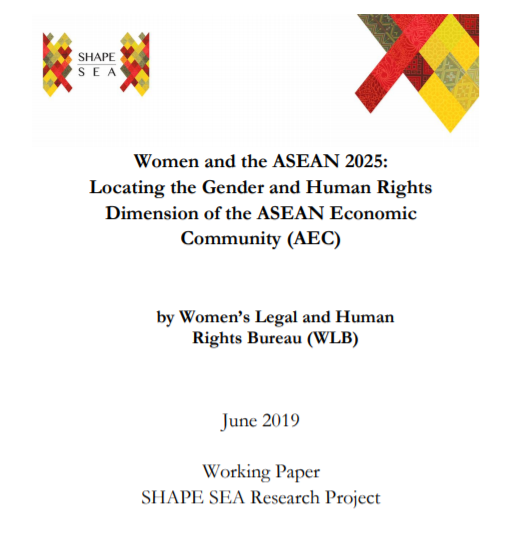 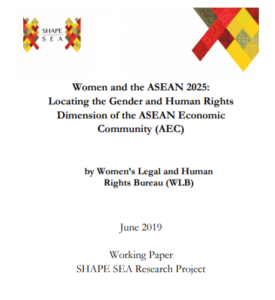 The framework of the AEC Blueprint 2025 is fundamentally flawed, as it is devoid of human rights and a gender perspective, essentially negating the ASEAN Vision 2025 of inclusive economic growth. Furthermore, while human rights and a gender perspective is critical to inclusive economic growth, only a few literatures delve into human rights and gender in relation to the AEC, which is troubling because development has often resulted to abuse and discrimination against marginalized sectors and communities, in which half of the population is composed of women. Hence, Weaving Women’s Voices in Southeast Asia (WEAVE) in partnership with Strengthening Human Rights and Peace Research and Education in Southeast Asia (SHAPE-SEA) has conducted an expository research anchored on feminist action research purposely to surface the multi-faceted and multilayered issues of women in relation to the ASEAN Community Vision 2025, which is premised on inclusive regional economic integration. Surfacing issues of marginalized women in relation to the AEC Blueprint 2025, particularly in the two ASEAN economies, Indonesia and the Philippines, as both countries were lauded by World Bank as among the fast developing economies in the region, would prove that the ASEAN regional integration is not at all inclusive, but discriminating and abusive to the marginalized sectors and communities of the region, particularly the marginalized groups of women (women with disabilities, LBT women, and indigenous women).