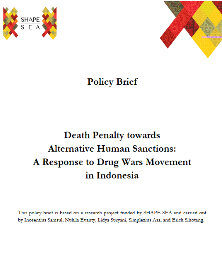 The Criminal Code and the Law on Narcotics are contradicting Indonesia’s Constitution and several international human rights covenants ratified by the Government of Indonesia. While the death penalty is still consistently imposed by the court’s decision, there are dissenting opinions by the judges involved. In addition, legal scholars, NGOs, and religious groups alike are increasingly calling for the abolition of the death penalty for drug criminals. Alternate human sanctions, such as imprisonment, should be considered.