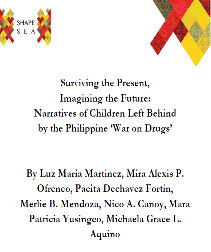 In the Philippines, President Rodrigo Duterte initiated a ‘war on drugs’ (tokhang) in 2016 to address the drug problem. Widely criticized as a violation of human rights and as a war against the poor, tokhang led to thousands of violent drug-related killings, leaving behind orphaned children and families with intense psychological trauma, deepening poverty and social stigma. This research aims to understand how orphaned adolescents living in urban poor communities in Metro Manila make sense of their experiences of tokhang, their current life situation, and their imagined futures.